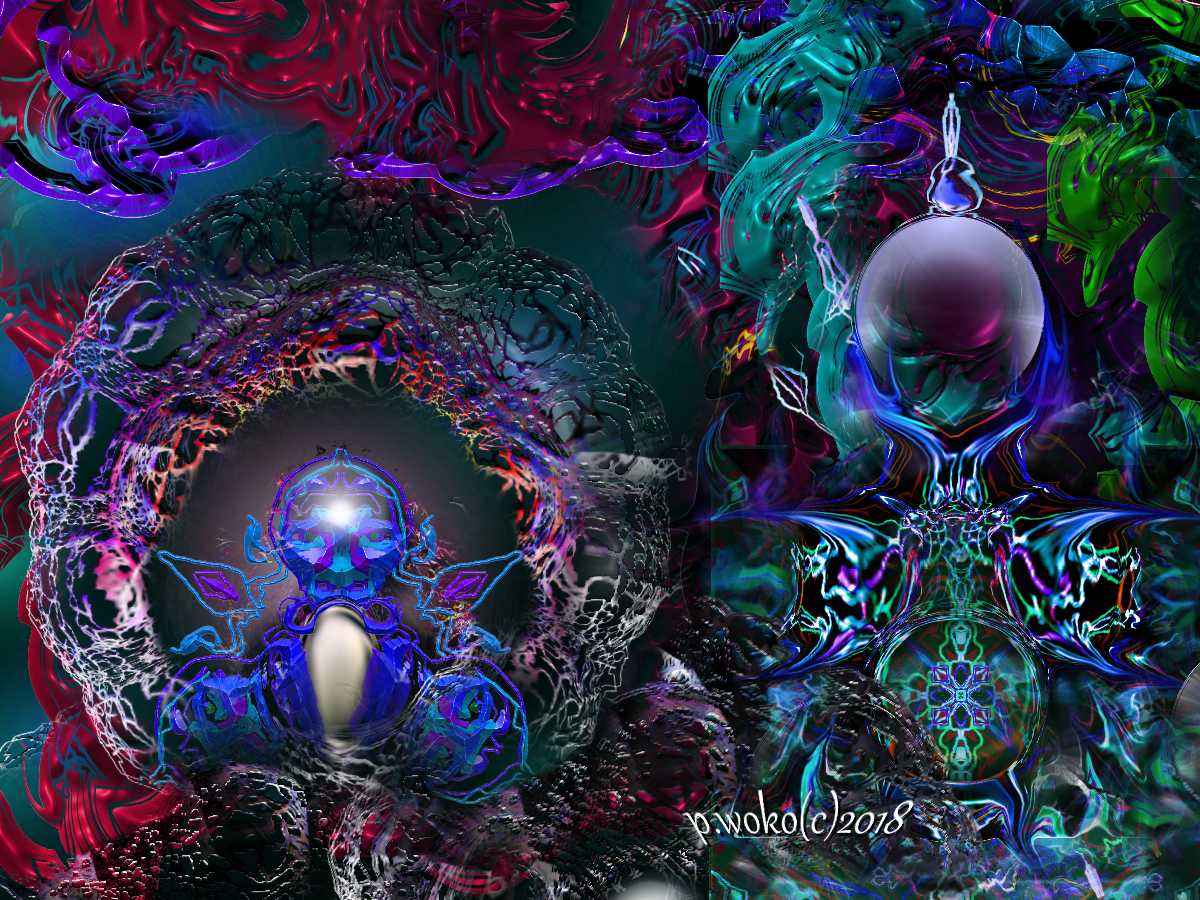 I was recently interviewed by Simon Young for the Fairy Investigation Society. He wanted to explore my experiences brought on by the condition known as Charles Bonnet Syndrome, and how this might relate to an understanding of what the faeries are, and the interfaces between metaphysical entity encounters and consciousness. I usually keep my own persona and experiences out of deadbutdreaming posts, and I have not talked about my acquaintance with the syndrome in any public format before this. But I thought readers might be interested in what this unusual condition entails, and the possible relationship between its symptoms and the faeries. Thanks to Simon for the interview and agreeing for it to be re-posted here.

Neil, thanks so much for agreeing to talk. Many of our readers will know you from one of the most extraordinary blogs on faerie-lore: deadbutdreaming. Can you tell us something about yourself and how you became so interested in faerie-lore?

I have a doctorate in archaeology from the University of Cambridge, and have been practising archaeology since 1992. About two decades ago I became interested in the confluence between various prehistoric archaeological sites and folklore, after reading Leslie Grinsell’s Folklore of Prehistoric Sites in Britain (1976).

A common experience, I think.

Indeed, and since then I’ve written more and more about folklore. My special interest is in the faerie-lore of Britain, as I quickly realised that these entities were deeply embedded in so much of the folklore of these isles, and that the great wealth of lore about them must mean something. I originally approached the subject from a purely traditional folkloric perspective – that is, understanding the faeries as remnants of previous historic belief systems, and perhaps as characters to explain the human condition through Jungian psychology. This changed somewhat during a meditation session at West Kennet Long Barrow in Wiltshire. This is a Neolithic burial chamber (it would have also been used for a variety of other ritual purposes), and while meditating within its confines in 1999 I had a vivid and super-real experience of various faerie creatures – very Froud-like, and evidently as aware of me as I was of them.

Was this your first experience of meditating?

No, I’d been meditating for a few years by this time, but it was my first experience meditating at a prehistoric site. It took me a long time to incorporate this encounter in to my world-view, but since this time I have had many more experiences, and my research into others’ encounters has drawn me to the conclusion that the faeries are some type of real entity. My current tentative interpretation is that they represent some aspect of human consciousness, not usually apparent in consensus reality, but which can interact with us when certain conditions are met. This is slightly simplistic, as the faeries certainly represent many more things than this, but I am convinced that at some level they are agents of a metaphysical reality that can overlap our own. I have been writing about this on my blog site since 2016.

The syndrome is named after the Swiss naturalist, who first described the condition in 1760. The standard NHS description of Charles Bonnet Syndrome (CBS) is that it is: ‘a condition experienced by people who are losing, or have lost, their sight. It involves seeing things which are not really there (having visual hallucinations). The hallucinations are most marked in low light or when relaxing and are often complicated scenes involving faces, children and wild animals.’ However, this is simply a description from a materialist, reductionist perspective, that assesses anything without material substance as ‘not real’. My own experiences [ed. see below] do not feel like hallucinations, and this is a common thread of many people who have CBS visual encounters. They will frequently describe humanoid entities (sometimes cartoon-like) that appear, usually fleetingly, in what remains of their peripheral vision. But there is usually interaction with these entities, and a feeling of something real being present, much in the same way as if another person were in the space. The correspondence between these descriptions and folkloric descriptions of the faeries and modern anecdotal testimonies of a variety of supernatural beings (including, but not limited to faeries) is distinct and noticeable.

If you don’t mind me asking how did you realise that you had CBS? How long did diagnosis take?

I lost most of my sight in my left eye through a retinal occlusion in 2014. In late 2015, after knocking myself unconscious through a fall, my visual cortex was damaged and limited the vision in my right eye as well. Shortly after this the symptoms of CBS began to manifest. I had never heard of CBS, and it was only after a discussion with my then psychiatrist that I was made aware this syndrome might be causing the unusual visuals I was experiencing. I then discussed the issue with my ophthalmologist, who termed the condition Visual Release Hallucinations. An ophthalmologist will not diagnose a person with CBS/VRH as such, but mine did take the time to discuss the condition with me, explaining that it is an uncommon, but well-known symptom of people with my type of optical problems. I have regular six-month ophthalmological assessments for my eyesight, and each report now contains a short section describing the continuing symptoms.

You talked about your own experiences? Can you give us some examples?

The visual entities I experience with CBS usually (though not exclusively) appear in low light, but never in total darkness, and I am always alone when they eventuate. This has happened several times a week since damaging my visual cortex in 2015. Sometimes the visuals are simple lights or smoke-like wisps, which are usually just glimpsed in my peripheral vision, last only a few seconds, and there is only a limited sense that there is something ‘present’. But often the visuals are more substantial, and will manifest as slightly cartoonish humanoid entities, frequently dressed in either archaic clothing or in garb that seems to emit a dull glow. The most fascinating aspect of these visuals is their apparent concrete reality, and even more compelling is the awareness that something is most definitely present. This always includes a form of telepathic communication, usually in the form of a series of phrases, which I never seem to be able to reply to. I can’t stress how real these communications are – as real as if someone were sitting next to me and talking.

Extraordinary! How long do they last?

Usually between a few seconds and several minutes. Any attempt to look directly at the entities will halt the experience; they do seem to exist only in the periphery of vision. I’ve learnt to not attempt to look straight at the visuals if I want the encounter to continue. A recent example involved a small, mechanical gnome-like entity who materialised on the arm of my sofa and proceeded to communicate the repeated words ‘Everything will be ok, let go of all anxiety… everything will be ok.’ I do realise that this sounds quite insane, and when these manifestations first began (although I was never frightened by them – they never seem to emit any hostility or malevolence, only empathy), I thought that the trauma of losing so much eyesight was taking me towards a mental breakdown. This is a common feeling of people with CBS. But after a while I just accepted the experiences as part of everyday life. I have to admit that I have come to enjoy the unusual nature of the experiences.

Very much so. The voices are never present without the visuals, and it is always quite clear they are coming from the same source. Again, when this first started to happen I did a lot of research into the symptoms of schizophrenia, one of which can be hearing disembodied voices, but I quickly satisfied myself that I was not suffering from this disorder. Having spoken with several people with schizophrenia since, I have realised their experiences are very different than mine.

And how often do you have these visions? Once a week? Once a day?

It does vary – probably twice a week on average, but sometimes they’ll be absent for as long as a fortnight, while other times I’ll experience them more than once a day. There is some type of link to how anxious I am feeling; they are more likely to appear during periods of anxiety. But this is not always the case – they seem to have their own timetable!

Would you interpret these as hallucinations then; or are you, somehow, getting privileged sights of a deeper reality?

I think that CBS may be one among many ways of allowing access to non-material phenomenon. If we are willing to accept that consciousness is not an epiphenomenon of the brain (thereby allowing CBS visions to be relegated to brain-generated hallucinations), but rather that consciousness is primary, and the instigator of reality, then these visuals may be allowed to take on an autonomous reality of their own. One way of looking at it is by seeing the brain as a reducing valve of a greater consciousness (à la Aldous Huxley), and that if it becomes damaged or altered in any way, it may allow in aspects of consciousness that are usually filtered out, thereby altering the genuine perception of an ulterior or supernal reality experienced by the person with the damaged/altered brain.

But, in as simple a language as possible, how does this work: how is it that a medical condition can lead to this extended vision?

I think CBS is a type of altered state of consciousness. I have taken a variety of psychedelics through my life, and there are definitely similarities in the perception of a non-ordinary presence. For me, these entities more often than not take a form that many people would describe as faeries. There are many thousands of recent reports from people taking the potent psychedelic substance N,N-Dimethyltryptamine (DMT), which correlate closely with both folkloric descriptions of faeries and also CBS visions. As per the last answer, it seems to me as if a change to the brain can, under certain conditions, allow us to perceive what is usually suppressed in waking reality. Perhaps my long interest in faerie folklore has predisposed me to interpret the appearing entities as faeries (rather than, say, aliens or ghosts) but I cannot emphasise enough the vividness of the experiences and the apparent substantiality of the visions and the communications they impart.

Neil, fascinating. Thanks so much.

The cover image is by the Amsterdam-based digital artist Peter Woko, and is called ‘Monkey King and Psychonaut’. Peter’s artwork can be found here, and his Twitter handle is @wokopsyart . Thanks to Peter for his permission to reproduce this piece on deadbutdreaming.

I write about my subversive thoughts... a lot of them are about those most ungraspable of metaphysical creatures; faeries. I published my first novel in 2016, "Set the Controls for the Heart of the Sun", and my second novel was published in 2020 - 'Dead but Dreaming', where some very cosmic faeries are awaiting the protagonist at an English psychiatric hospital in 1970... View all posts by neilrushton

33 thoughts on “Charles Bonnet Syndrome and the Faeries”